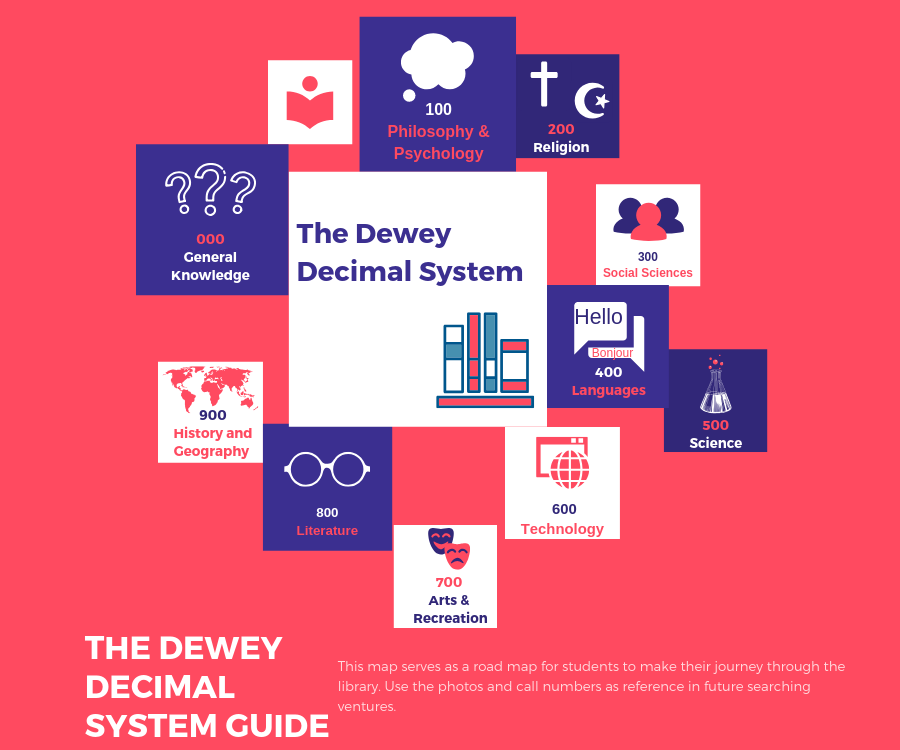 Who uses Dewey Decimal at the University?

Each of the above classes has ten divisions, which are further divided. The more numbers, the more specific the subject. We have an online guide or can give you a handout if you wish further clarification. For example, when shelving folklore in the Dewey classification system, items are classified in the 300 section (Social Sciences). This subject area is further divided; 398.2 represents Customs, etiquette and folklore. Further expansion of this number classifies items to Native folk lore, Russian folklore etc.

The Dewey decimal system coordinates materials on the same subject and on related subjects to make items easier to find by using a combination of letters and numbers. Every book in the library is given a unique call number to serve as an address for locating the book on the shelf.

a) The first part is the Dewey decimal number itself. The first line of the call number is the subject matter classification (a series of numbers that represent the subject area).

b) The second part is called a Cutter line and is a more specific classification of the book. The Cutter number can represent the author or title information.

Books in our Dewey collection are arranged in the stacks numerically by call number, from 001 to 999.

What is a Curriculum Collection?

A Curriculum Collection is a collection of materials representative of the range of resources usually found in preschool, primary and secondary school libraries and are provided to support curriculum studies taught in the College of Education.

The cataloguing of our Fiction and Dewey Collections is unique to USask; it is a blend of Dewey with Library of Congress Cutters. A decision was made to change this format to one that will continue to keep our Curriculum collections as academic collections but facilitate a more standard practice of cataloguing. The new classification system will be more of a browsing style, consistent with school libraries. We now have a blend of two systems but it is not difficult to shelve or locate items. Training for shelving is given in the branch.

Curriculum Guides are produced by the Saskatchewan Ministry of Education. They are shelved by a local call number which is simply the name of the subject of the material. All guides are shelved in alphabetical order. For example, English, Health, Mathematics, etc. Within subject headings, items are shelved by title.

In the Dewey Decimal classification system, fiction is usually shelved separately from nonfiction. This is the case in the Education & Music Library.  Fiction materials are shelved alphabetically by the author's last name. Fiction books have a local call number.