Working with a Diverse Student Population

A diverse and inclusive campus is a healthy campus. The benefits of diversity include a broader range of talents, skills, and experiences; strengthened innovation; and an improved overall atmosphere for all of us. In a study of 1,800 professionals, 40 case studies, and many focus groups and interviews, diverse groups of people are known to be more productive, creative and innovative than teams with everyone from similar demographics (Harvard Business Review, 2013).

While the University of Saskatchewan hasn't reached its diversity goals, students, staff, and professors at the USask are from all walks of life. All of us working, visiting, and studying here deserve respect and the right to learn in a positive environment.

For many students, university is the first time they encounter such diversity and understanding how to interact with people who differ greatly from themselves and while new interactions and relationships are enriching, they can take time and may be challenging.

It is important to remember that all USask students have met all the criteria to attend university, are capable of learning, and bring with them their beliefs about education, their talents, cultural backgrounds, personality quirks, experiences, hopes, and dreams. Moreover, they contribute to a stronger and healthier community. The university has a diversity, equity and inclusion policy that our centres abide by.

College and Units are accountable to:

Improvements in technology, learning assistance, and medications have made it possible for increasing numbers of people with disabilities to access university education. The majority of students registered with Access and Equity Services (AES), formerly known as Disability Services for Students (DSS), have ‘invisible’ disabilities, including mental health issues, neurological diversity (such as ADHD and Autism Spectrum Disorder), communication disabilities, learning disabilities (LD), and some types of medical disabilities.

At the U Sask, there are currently 1,162 undergraduate students registered with AES, of which over 800 students actively use the services provided and approximately 50% are enrolled in the College of Arts and Science.

Sometimes due to societal stigmas, some students choose not to disclose their disability. For this reason, it is important for tutors to have a general understanding of the interplay between academic issues and disabilities.

A disability may impact the encoding, organization, retention, and expression of information. A student may have an average or superior intelligence that is masked by an aspect or combination of these issues and may experience challenges such as:

Alone each of these challenges can result in frustration and anxiety for the student decreasing the student’s processing ability; however, these challenges can also interact with each other and circumstances to further impact the student’s learning. Keep in mind this list of challenges is not comprehensive nor does it fully apply to each disability. Students with mental health problems are often registered with Access and Equity Service, too, and the above learning disabilities can often be comorbid with mental health issues. For example, ADHD can be comorbid with depression.
Please refer to module 4.2 for more information about helping.

When tutoring, be aware that underlying any student’s frustration, antagonistic or apathetic behaviour, or difficulty understanding the assignment or your questions, may be due to a disability. A student may report feeling as though they have “hit a wall” in their class/assignment. Possibly they did well enough in high school, yet are struggling with making the transition to university.

Environments and situations influence each student, and simply observing that a student seems to be facing one or more of these challenges during your session does not indicate that the student has a disability. Unless a student clearly discloses a disability, do not ask them whether they have considered registering with AES. And if a student discloses that they have a disability, you can always ask them how you can adapt your tutoring to their needs. Most students with disabilities can clearly name the accommodations they require.

Many students with disabilities can benefit from the use of assistive technology, such as text-to-voice software, voice-to-text software, screen readers, paper-based computer pens, and idea-mapping software. If you know what’s available, and how students can access it, you can make some very helpful referrals. Skim over and then bookmark this page which lists adaptive technologies available at the U Sask, and how and where to access them: https://students.usask.ca/health/aes/assistive-technology.php
Please see Module 7: Ending a Session for complete referral information.

Read the following article, and then answer the questions in the quiz at the end of the module.

In the 2019 academic year, 2,900 undergraduate students self-declared as Indigenous, which can include First Nations, Inuit, or Metis students.

It is important that key people students interact with (such as tutors) are aware of the extra challenges and barriers that some Indigenous students may face, such as

Note that the Writing Centre offers on-site writing help at the Aboriginal Students’ Centre (ASC) twice a week in the fall and winter (COVID-19 update: hours will be via Zoom appointmen  Check the website for hours between September and March as well as the programs and services that are offered.

Read the sections (Introduction p. 304; Teachers’ Expectations p. 304-306; Aboriginal Students: Exceeding Teacher’s Expectations p. 312-315; Mistaken Attributions Leading to Stereotypes p. 315-316) of the following article and then answer the questions in the quiz at the end of the module.

Some of the challenges facing international students often include:

Read all of the following articles and then answer the questions in the quiz at the end of the module.

Avoid the assumption that all international students are English as a Subsequent Language (ESL) students. For example, a Nigerian student may have an accent different than someone with a regional Canadian accent, but English is the official language of Nigeria. Furthermore, even if a student’s first language isn’t English, they may have excellent spoken English, and fairly poor written English, or they may understand spoken and written English very well, but still have a few remaining challenges with speaking and writing.

Remember, too, that practices vary from country to country and even students who speak fluent English may struggle with differences. The following table highlights the possible differences and struggles international students may encounter.

LQBTQ2S+ (Lesbian, Gay, Bisexual, Transgender, Queer or Questioning, Two-Spirit and additional sexual orientations and gender identities) students often face a number of additional challenges both on and off-campus. Some of these challenges differ depending on the student’s experience and others are fairly constant.

Specific to each experience, students may face:

These additional challenges impact the day-to-day experiences of LGBTQ2S+ students and may influence their interactions with peers, tutors, faculty, and staff.

Language and word use can be biased toward dichotomous gender.

Activity: Watch this recording of a workshop developed by Carolina de Barros and Juno Raine. How can you apply what you learned to your tutoring?

If you are unsure which pronoun to use when referring to someone, try to use a person's name and non-specific pronouns such as ‘they.’ A variety of gender-neutral pronouns exists; however, there sometimes isn't a consensus on which to use, and so take direction from the student themselves. This has lead to the usage of plural pronouns (they, them) in place of gender-specific singular pronouns (he, she) in spoken and conversational language. 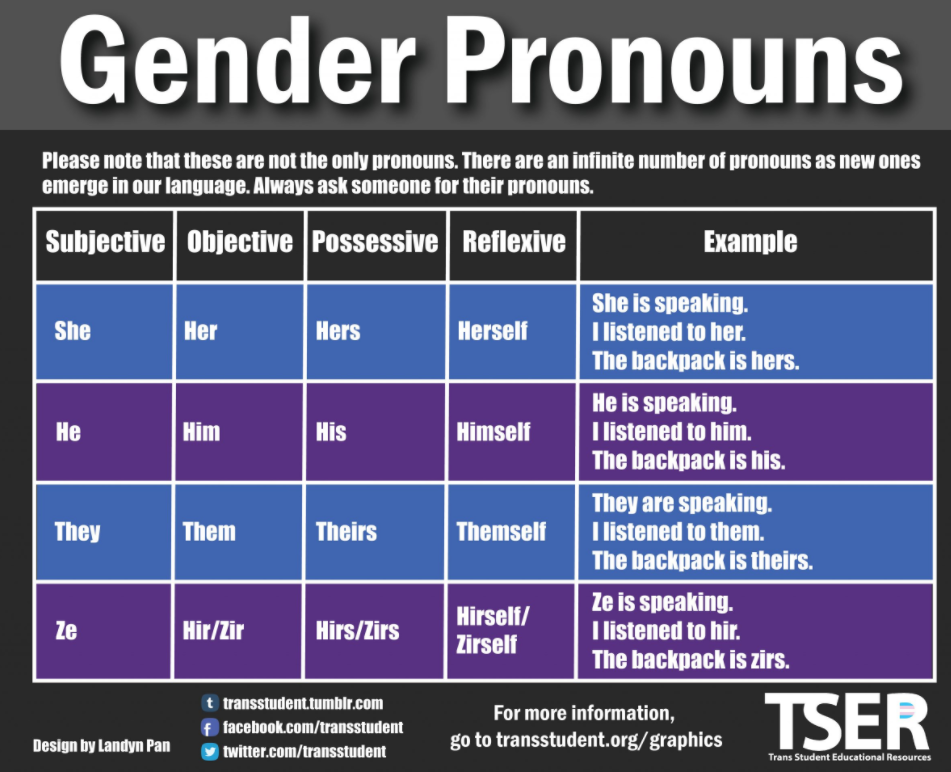 Tip: It's helpful to identify your own pronouns as an opening to a student to feel safe in identifying their pronouns (e.g., a name tag with your pronouns, your signature line in an email, your appointment bio on the writing centre website, or your verbal introduction: "Hi, I'm Liv, my pronouns are she/her; what would you like to focus on in our time together today?" Some tutors wear a name tag that shows their pronouns.

The chart below gives an overview of gender neutrality in APA, Chicago, and MLA styles. The headings are hyperlinked to more information and examples. Please note that for all three, a person is free to break the rules to use "they" in the singular. When coaching students, let them know the "rules," but also let them know how to advocate with their supervisors, prospective publishers, committees, or professors for breaking the rules!

Overall, be respectful. Avoid discussing or speculating about people’s sexuality or gender identity without their permission and use inclusive, gender non-specific language. Consider reading GLAAD’s Tips for Allies of Trans* People.