Skip to main content
It looks like you're using Internet Explorer 11 or older. This website works best with modern browsers such as the latest versions of Chrome, Firefox, Safari, and Edge. If you continue with this browser, you may see unexpected results.

The Doukhobors in Canada: a select bibliography 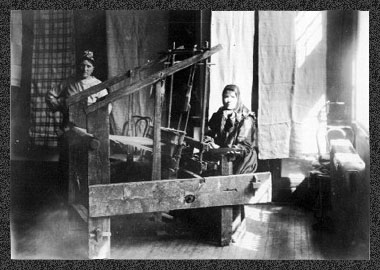 The Doukhobors, a small sect of Russian pacifist dissenters, encountered serious persecution from the official state church and the government in late nineteenth century Czarist Russia. With the assistance of Count Leo Tolstoy and British and American Quakers over 7400 Doukhobors emigrated in 1898 to settle in what was to become Saskatchewan. Initially they received concessions regarding education and military service and were permitted to register for individual homesteads but to live communally. However in 1905 most of their homestead entries were canceled when they refused to swear a mandatory oath of allegiance. In 1908 their spiritual leader Peter Verigin led many of the Doukhobors to a new community in southern British Columbia.

Photo: Mrs Bludoff, Sr., of Verigin, is seated at her loom which was brought from Russia [in 1898]. Mrs. Kosema Tarassoff of Langham stands beside her. Lengths of woollen homespun and linen hang on the back wall. (UASC Manuscripts Collection - MSS C555/1/4.2e/1)

We have compiled this bibliography, which lists some of the material on Doukhobors held in the University Archives and Special Collections Department, University of Saskatchewan Libraries. It was originally compiled for the 100th anniversary of the departure of the Doukhobors for Canada in December, 1998.

To find other material on the Doukhobors held outside this department, type 'Doukhobor' as a word search, or 'Dukhobors' as a subject search, in our library's catalogue.

The material referred to on these pages can be found in the University Archives & Special Collections Department, University of Saskatchewan Libraries. This material can be viewed in the reading room. It is best contact us ahead of time if you wish to view any of this material, so that we can ensure the material is ready for your arrival.

All the photos featured on these pages were taken at a demonstration held at the University of Saskatchewan and put on by the Saskatoon Arts and Crafts Society in June, 1925.