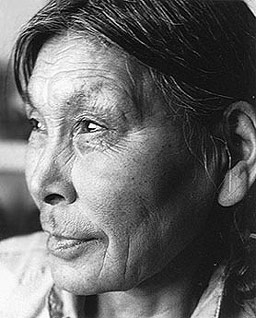 (1906-1985) Born near Back River in the Northwest Territories (now Nunavut), Oonark was a member of the Utkusiksalingmiut Inuit people. She used traditional processing methods to work with caribou and other materials to produce Indigenous clothing and textiles. It was after she moved to Baker Lake in the 1950s that her artistic talents were recognized. Her distinct bold colour designs draw heavily from Utkusiksalingmiut traditional ways of life and the roles of Inuit women. Oonark is well-known for her work in textiles, printmaking, and drawing. Her works have been displayed at galleries throughout Canada, including The National Arts Centre in Ottawa, the Canadian Museum of History in Gatineau, The Winnipeg Art Gallery, and Isaacs Inuit Gallery in Toronto. She was admitted into the Royal Academia of Arts in 1975, and in 1984 she received the Order of Canada for contributions as an artist.1