EXAMPLES OF REFERENCE CITATIONS IN TEXT

Use the author’s surname, followed by the date of publication.

Use both names when a work has two authors.

School success may be an accurate predictor of both self-esteem and self-concept (Gage & Berliner, 1989).

Gage and Berliner (1989) noted that school success may be an accurate predictor of both self-esteem and self-concept.

When a work has three to five authors, include all the authors in your first citation; in subsequent citations, use the first author’s last name followed by et al. and the year.

When a work has six or more authors, use the surname of the first author, followed by et al. and the year.

Ornstein et al. (1999) suggest that artful teaching relies to a great extent on talking, rather than telling.

For corporations, associations, government agencies, etc., use the full name in the first citation, and any commonly recognized abbreviation or acronym in subsequent citations.

Use the author’s initials and surname when your paper also cites another author with the same surname.

Citing a work with no author or with an anonymous author (APA 6.15)

When an article, chapter, or web page has no author identified, cite the first few words of the title as it appears in the reference list entry and enclose them in double quotation marks, but italicize the title of a book, brochure or report with no identified author:

Cite an author as Anonymous only if that author is specifically designated as such in your source.

Citing two or more works within the same parentheses (APA 6.16)

Secondary sources should be used sparingly, and only sources that you have actually read should appear in your Reference list. If you are unable to consult the original source, you may cite a secondary source in your text:

Action research uses a spiral process to achieve desired social purposes: the planning and implementation of interventions are closely linked to fact-finding on the resulting impact within the organization (Lewin, 1946, as cited in O’Brien, 1998).

Lewin is cited in the text, but a Reference list entry is created only for O’Brien.

In-text citation includes the original date of publication and the date of republication or translation.

Ancient classical works and religious texts numbered systematically across all editions do not require reference list entries. Simply identify the version used in the first in-text citation and use the standard numbering system rather than pagination when referring to specific parts of the work:

No corresponding Reference list entry is created for a personal communication.

Use commas rather than brackets to set off the date of publication when citing within parenthetical text:

When the document has an author, use the standard author/date format.

Banks (2003) views the reluctance to fund GLB support groups, and tacit institutional endorsement of heterosexual cultural norms, as the result of negative attitudes ranging from homophobia to heterosexism.

When a Web document has no author, use only the first few words of the title for your in-text citation:

Cree, Dene and Saulteaux are understood by many people in Saskatchewan, but the future of even these languages remains a concern (“Aboriginal Languages,” 2007).

Aboriginal languages: use it before we lose it. (2007). Heritage e-Advocate, 2 (1). Retrieved from http://www.saskculture.sk.ca/Heritage_e-Advocate_V2.I1_text.htm#Aboriginal_Languages

To cite specific parts of an electronic document, give page numbers if available. Otherwise, identify the location within the document by referencing the appropriate chapter, section, paragraph, or heading, etc. 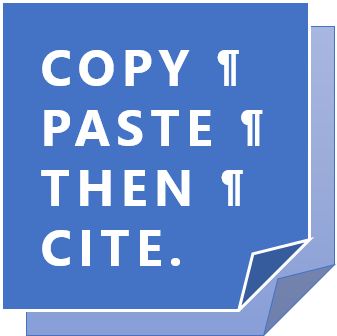 Give credit where credit is due! All the sources that you use must be cited in your text. This principle applies whether you quote directly, summarize, or paraphrase the work of others. For more information on avoiding plagiarism, consult section 1.10 of the APA Publication Manual (6th ed., pp. 15-16; see also “When to cite,” pp. 169-170). For institutional policy at the University of Saskatchewan, see the following resources from the Office of the University Secretary: Student conduct & appeals, Integrity defined.

NorQuest Library has noted that the formal APA style does not have a format for Indigenous Elders and Knowledge Keepers so they have developed this citation style in the spirit of wahkôhtowin and reconciliation.

Unlike other personal communications, Elders and Knowledge Keepers should be cited in-text and in the reference list. The in-text citation format should follow the same guidelines as noted in the paraphrase and direct quote tabs:

Note: If you would like to approach an Elder or Knowledge Keeper for teachings, remember to follow protocol or if you are unsure what their protocol is, please ask them ahead of time.

Thank you to Lorisia MacLeod, a librarian at NorQuest College in Edmonton, for developing this template and allowing us to share it.

This work is licensed under a Creative Commons Attribution-NonCommercial 4.0 International License. NorQuest details and exceptions.