Modern history has been defined as beginning in 1450, with start of the Renaissance.  This research guide highlights library resources in support of research in modern world history, excluding that of Canada and the United States of America.  This guide aims to be a gateway to the best sources available from USask Library collections and beyond, and includes sources accessible online, in traditional print, and in other formats such as DVD and microform.

For other topics, especially those dealing with area studies or which are interdisciplinary in scope, consult the complete subject list of USask Library Research Guides at: http://libguides.usask.ca/ 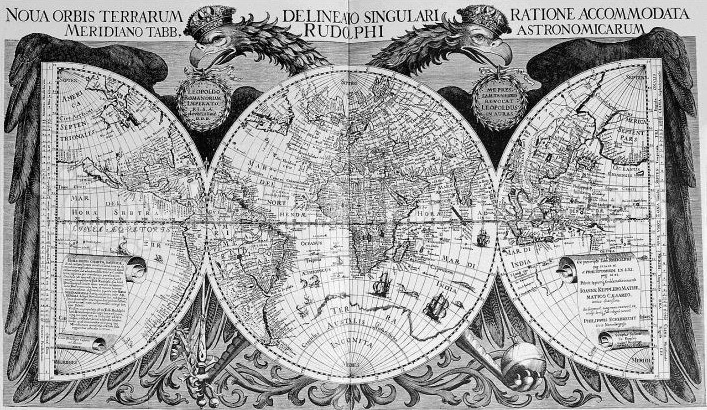 The World in 1630, drawn by Philipp Eckebrecht

This map was drawn by Nuremberg cartographer Philipp Eckebrecht at the request of his friend, the German astronomer, mathematician, and astrologer Johannes Kepler.  The map was used within Kepler’s major work: Tabulae Rudolphinae (Ulm: Johannes Saur, 1627-30).  That book consists of a star catalogue and planetary tables, and is based in findings of Danish astronomer Tycho Brahe (1546-1601).  The planetary tables are named "Rudolphine" in memory of Rudolf II, the Holy Roman Emperor from 1576-1612.  The printing history of the book and of the map are complex: 1000 copies of the book were printed between 1627and 1630, in three known editions; not all copies of the book contain the 44 x 72 cm world map, also known as Nova orbis terrarum, which is featured here.

The Library of Congress (LC) provides complete bibliographic information on this important map, including an online image to the copy held by LC: https://www.loc.gov/resource/g3200.ct001471/